A couple of months ago RK, who retired from Adult Services shortly before I arrived there in 2000, approached me at the reference desk.  He was weeding his book collection in anticipation of moving to an apartment in a retirement community.  He had a few items for me that he thought the library could use.  In the weeks following, I saw books in the donation bin that I knew had belonged to him:  books about the theater, opera, great composers, Abraham Lincoln, Walt Whitman.

I am not moving, but I feel a need to rid myself of useless baggage:  books that no longer speak to me, files I haven't touched in years, fencing equipment, guns that I will never take to the range, my long-unfinished plywood skiff, the two old computers I keep for the games on them but which I have not actually powered up in a couple of years, my banjo.  It is like confession, admitting what I no longer care about.

My parents left it until too late, and I and my sisters had to deal with their stuff, filling up a boxcar-length dumpster.

Stanley Fish writes about letting go of his books and whether to retire on the NYT Opinionator Blog in Moving On.


In the hours and days following the exodus of the books I monitored myself for a post-mortem (please excuse the hyperbole) reaction. Would I feel regret? Nostalgia? Panic? Relief? I felt nothing. What should have been a momentous event barely registered as I moved on to what seemed the more important task of choosing a new carpet. I was reminded of what a colleague who had left a university after 23 years replied when I asked him if it was difficult to do. He said, “It was like checking out of a motel.”

Many of the comments are worth reading, at least the NYT Picks.
Posted by Brett at 1:02 AM 4 comments: 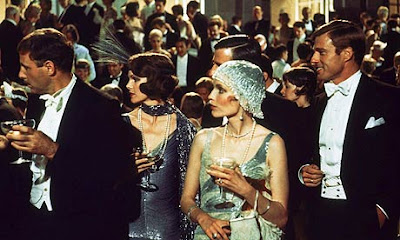 Thanks to Andrew Clarke, at the Anthony Powell Discussion List, for mentioning Douglas Murray's article in The Spectator, The not-so-great-Gatsby.  The novel, says Murray, "is one of those works which has been subsumed and overtaken by its own myth."  He draws a parallel with Brideshead Revisited, which has also been filmed a couple of times.


But just as most people now seem to remember Brideshead Revisited not as a novel about religion and alcoholic disintegration, but one of idyllic summers and teddy bears, so Gatsby is remembered as something it is not. Rather than a description of futility and envy, it tends to be recalled for its aspiration and glamour.

Anthony Powell thought highly of The Great Gatsby, reading it again and again.  I read it for the first time a couple of years ago.  It seemed a pretty bleak tale to me.  Powell, clearly more perceptive than me, described it as:


...a sad serious book about people who are on the whole not themselves serious [that] treats of romantic love in purple passages that somehow never become absurd, while in the many funny scenes Fitzgerald is unrivaled for wit and irony. Tender is the Night is a pretty good novel, the Last Tycoon if completed, might have been pretty good too, some of the short stories are accomplished, but The Great Gatsby is in a class by itself

I doubt that I would prefer Leonardo di Caprio's Gatsby to Robert Redford's.  I did go to see the 2008 film of Brideshead Revisited, but it fell far short of the 1981 television serial.  I wouldn't even watch the 2002 television remake of Doctor Zhivago.

Memorial Day is approaching, and people must be planning picnics.  I helped two women today who wanted to find recipes they had made many years ago, and who no longer had the cookbooks they had appeared in.

The first woman was a walk-up.  Did the library have The Better Homes & Gardens Cookbook?  No, we had other BH&G cookbooks, but not that one.  Our copies of the BH&G New Cookbook, which appeared to have been a revised edition of that original book, were all lost or withdrawn.  She asked to see The BH&G All-Time Favorites Cookbook, and then looked through the index.

I asked her again what she was looking for.  She wanted a recipe for tuna casserole that had been in that BH&G cookbook.  Her copy of the book had been destroyed.  I thought I might be able to find it online.  We returned to the reference desk, and I was able to find it, thanks to Retro-Food.Com, where it was copied from The Better Homes and Gardens Casserole Cook Book, (1961).  I turned the monitor so she could see it.  She said that it was the recipe, because it had the pimientos in it.  I printed it out and gave it to her.  She had a big smile as she read through it and thanked me.

The thing she remembered about this recipe was that it included "chow-chow", a pickled relish that she said Publix Super Market told her they had.  We didn't have The Springtime Tallahassee Cookbook.  I was doubtful, but a search for "springtime tallahassee chicken salad", amazingly, yielded a recipe for Tallahassee Chicken Salad, chow-chow and all, from The Florida Cookbook, by Jeanne Voltz and Caroline Stuart, at RecipeSource.Com.

In a medium-size mixing bowl, combine the chicken, celery, chowchow, and pepper sauce.  Mix lightly; add the mayonnaise and mix again.  Add more mayonnaise if needed to moisten well.  Chill 1 to 2 hours before serving.  Line a bowl or platter with greens and spoon the salad onto the greens.

NOTE:  To poach chicken: Combine 1 pound each of skinned chicken thighs and breast pieces in a large skillet with a carrot, peeled and sliced; a rib of celery, cut in chunks; a small onion, cut in halves but not peeled; pepper, a sprig or two of parsley, and a lemon half.  Cover, and simmer 30 to 45 minutes, until juices run clear or golden when the chicken is pierced with a fork.  Cool the chicken in the broth.  Cut meat off the bone and chop it coarsely.  Refrigerate until ready to make the salad.  If desired, the broth should be saved for soups or other uses.

If you want an easy way to feel like a hero, find a recipe for an old woman.  Her warm thanks made my day.
Posted by Brett at 1:03 AM No comments: 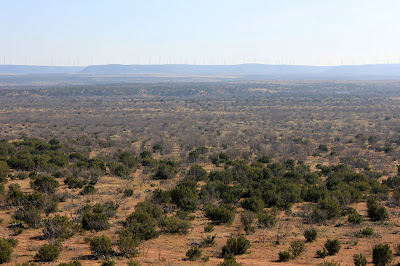 A nice collection of images from West Texas, around San Angelo, by "tomlandry7".  If you've lived in Texas, and miss it, you might like them
Posted by Brett at 12:15 AM No comments: 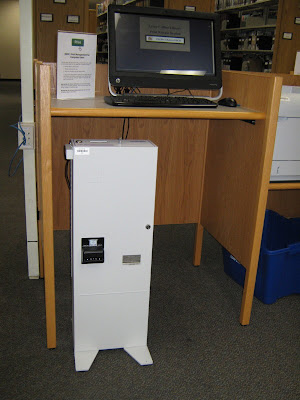 Jimmy G. shows librarians how to work the coin-machine, in preparation for the introduction of "pay-for-print" on Friday. 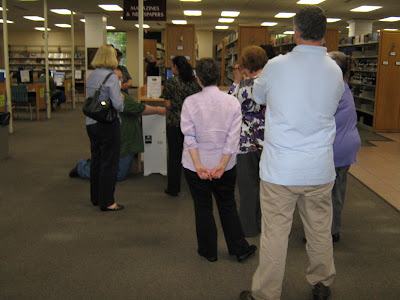 Jimmy rotates the box around to open the back. 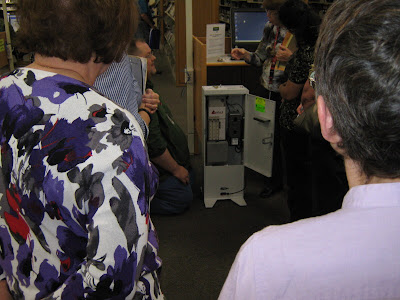 Jimmy shows us how to unjam it, how to take the money out, how to refill it.with change.  It is pretty simple.

Users with library cards will get ten free pages per day, paying for additional pages at ten cents per page.  They can put credit on their cards or pay in cash.  "Guests"  will have to pay for any printing in cash.

We anticipate that printing will go way down.  It has already.  This will affect our supply of scratch paper, which we keep in a wire basket at the reference desk to give away.  There is unlikely to be the amount of waste paper that we've gotten in the past from unwanted print jobs.

You are trying to do reference work, helping people find information and use the collection, in person and by telephone, but there is also the constant approach of people wanting "guest passes", who are unable or unwilling to provide themselves with library cards.  And then there are all the other kinds of help that public-access users need, with e-mail, file management, equipment, (such as USB drives and head phones).  We still do some of all this, but to have a skilled Tech/Media staff person at point is something we've never before had.

Finished Patience with God:  the story of Zacchaeus continuing in us, by Tomáš Halík.  My interlibrary loan copy is due May 9.  I bought the e-book editions for this and Night of the Confessor, for my Sony Reader.  Second-hand copies of Patience with God, (2009), are now unavailable at reasonable prices.  Halik has perhaps struck a different chord, in this "Year of Evangelism".  Patience with God, with seekers, with non-believers.  Patience is mercy, love, forgiveness.
.