Ten Years After: Going To The End Of The Line 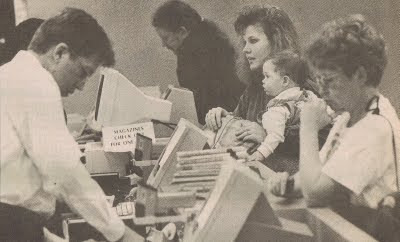 Working my way through weeding the 300's, (I finished the 364's, "Criminology", on Tuesday), I continue to weed titles that have not been checked out for roughly ten years, -2+x, about the length of time since I left the bookmobile and came to work in adult services at the main library in 2000.  Many of these weeds, published in the late '80's and early '90's, are visibly dated, with unattractive covers by today's standards.  Robert Vesco, (the Nixon-era swindler), the savings & loan crisis of 1988, (forerunner of our current banking troubles), the Jewish Mafioso Meyer Lansky, all have receded from our common memory.

Where has the time gone?  Into the rear-view mirror.  My elders have almost all retired.  Energetic young women are taking their places to chart the library's future.  And I, (now, at 56, eligible for the senior discount at the New Leaf food co-op), am in the mood for some "sense-making", if you will forgive the information science jargon.

In 2000, the much-hyped but mostly empty "Y2K" crisis, which had prompted a very profitable world-wide computer hardware upgrade, had just passed.  We had a mere 10 public-access Internet PC's in Adult Services, (with more downstairs in Media Services).  There are now 25 on the second floor, about as many as the wiring can handle.  Databases were moving from CD-ROM stations requiring manual updates to online subscriptions, and the PC's that were dedicated to CD-ROM apps, (Dun & Bradstreet, Car Shop, American Business Disc, Bible Explorer and others), were converted to additional Internet PC's by 2002.

My IP position, (Information Professional, aka Librarian), for which I was hired upon graduation with an MLS in 2001, was already obsolete.  My predecessor had been responsible for the PC's in Adult Services.  I had trained with her on how to clean off all the garbage programs patrons would install every day on the Internet PC's.  (Anyone remember Bonzi Buddy?)  But the county's Management of Information Services department took over the maintenance and upgrading of all library computers.  I inherited a box of cables and CD-ROM equipment that I had no use for.

I can't say that I regretted it.  The next few years would see solutions for things that had been real headaches.  The reservation of public-access PC's was automated, ending the recruitment of volunteers to do it with a paper log.  Centurion Guard hardware was installed that wiped all user modifications to PC's, including viruses, upon reboot.

Automation of library tasks extended far beyond the management of public-access PC's.  As the decade wore on, it would encompass much of the work that had kept us occupied from day to day, particularly with the ordering of materials and the processing of patron requests.  OCLC retired its Interlibrary Loan client applications in favor of a web-based interface.  The book wholesaler, Ingram, did the same with iPage.  The library granted patrons the power to request library materials online.  We developed web applications that let patrons "subscribe" to new hardcover releases for a selection of bestselling authors, and fill out request web-forms for materials the library did not own, new or otherwise.

This was all oddly fortunate, as the economy began to slide into recession at the end of 2006, and positions were lost or left unfilled.  If we had fewer staff to do the work, at least there was less to do.

With fewer staff, the center of gravity for the IP's shifted from the workroom to the service desk.  The reference workroom was once a lively place, where librarians bantered as they worked away at their desks.  Now the workroom is normally almost deserted.  We are out on the floor most of the time.  And that is all right with me.  It's what I do best.

This busy week in June, with the phones ringing, students needing help finding books for their summer reading assignments, Internet users needing all kinds of help navigating the Web for work and school and play, only brings home to me how very much reference librarians are still indispensable.  The information landscape has changed, but we are still the ones with the map, who can point the way.
Posted by Brett at 12:03 AM

You are still just as cute!--RC