Webinar: Empowering the Reader in a Digital World

We had hoped to have a group of IP's, (information professionals, what librarians are called these days), attend this, but it didn't work out, and I was asked to go alone and boil it down for everyone else.
The hour-and-a-half presentation by Al Carlson and Chad Mairn was an overview of the e-book phenomenon with regard to libraries, and was aimed at librarians with little assumed knowledge of it.
It's not as good as hearing the presentation, but the slides and notes can be viewed here:
http://www.slideshare.net/chadmairn/empowering-the-reader-in-a-digital-world-7312595
Carlson and Mairn believe that, "history suggests that eBooks will rapidly invade the codex space", and that, increasingly, library web sites will be the way services are delivered, rendering physical circulation of materials, library locations, and courier deliveries obsolete.  But they point out  a number of ways in which current e-book technology and distribution models are problematic for libraries as well as for publishers.

What does a library actually buy when it purchases an e-book from OverDrive or NetLibrary?  What about the profusion of file formats and proprietary DRMs, and all the different e-readers and other devices people want to read e-books with?
They conclude,
Are Carlson and Mairn right?  Will e-books replace printed books as DVD's replaced VHS cassettes?  The analogy is not quite parallel, since DVD's are still physical containers, whereas e-books are digital.  The library owns DVD's outright, whereas it only buys access to download e-books from a vendor, for as long as that vendor has the right to provide it.  But I am inclined to agree that they will, over time, for certain kinds of books.  The New York Times's addition of an e-book bestseller list lends weight to the prediction.  Still, for libraries and for publishers, the current e-book distribution model is seriously flawed.
Posted by Brett at 1:19 AM No comments:

Back at work today, after taking most of Holy Week off.  Several people asked whether I had a good time off.  Of course I said yes.  What use to bother them with what the end of Lent is like?

I was glad that R. was able to come with me to all the Triduum rites:  The Lord's Supper and the Washing of the Feet on Thursday night, the Stations of the Cross on Friday afternoon, and the celebration of the Lord's passion and death, with the Veneration of the Cross.

We usually go to the Easter Vigil on Saturday evening, a long service, not heavily attended, when the new fire is lit and candidates are baptised and/or confirmed or received into the Church.  This year, we were scheduled to serve as eucharistic ministers at the SRO Sunday 10:30 Mass, with babies, Easter outfits, and people lining the walls.  I think I must have gotten a lot of the standing crowd, because I was the last one left distributing hosts.  At least I didn't run out.

As of Sunday, I had gone 22 days smoke-free.  I had observed my "smoking devil" building a case for smoking again after Lent, but I was amazed at the struggle I had to put up to overcome the temptation.  I felt hungry for tobacco smoke, as if it were a food I was starved of. 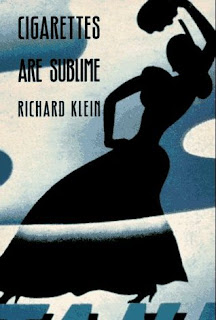 Richard Klein's book, Cigarettes Are Sublime, is just about the last word on cigarettes, "with its origins in the author's urgent desire to stop smoking."

Rain early this morning.  It's clearing now, in good time for the Art In The Park festival downtown.  I had to detour around it to get to the library.

Two weeks smoke-free, and I still feel like Gollum without his "precious".  Shouldn't be surprised.  I smoked for years and years.  Sigh...

Is the book shop open today?

Here's Ron K., retired colleague.  Needs help copying entry for Reds from The Motion Picture Guide.  Says, "Don't ever let them get rid of this!"

Woman says man has USB device plugged into back of catalog PC, thought I should know.  I go to look.  A man is charging a phone and an iPod.

Where are tax "booklets"?

Deputy sheriff stops by to ask how my quitting smoking is going, gives me a thumb-up.

Police officer asks for deputy.  They take a young man at an Internet PC into custody, walk him downstairs.

Couple of women looking for The 48 Laws of Power by Robert Greene.  Take to shelf.  She asks me to show her how to use self-check machine, but her card's expired.  Have to send her to circulation.

"Could you direct me to the tax assistance?"

Police officer goes back out 2nd floor exit,  Young man they were talking to comes back up, gets back on Internet PC.

"Yeah so where's the Henderson Room?"

Go to pull more humor for my display.

DT from Youth Services asks who on staff does the African-American BookLetter.  I say I believe it is done by BookLetters, is not a staff production.

Where are meetings rooms A and B?  Tallahassee Authors Network is meeting there now.

12:18  Watching people going about using the library:  browsing, working at tables.  No one seems to need my help at the moment.

Phone:  The Norton Anthology of African American Literature.  Circulating copies are lost, but have in reference collection.  Can he photocopy?  Yes.

Phone:  He needs a couple of tax forms, schedules C and SE, will come in.

1:04  Back from lunch.  Sandwiches in the gazebo with David Downing's Zoo Station, a very readable suspense story set in Germany in 1938.  It's got that feeling of creepy paranoia and danger, like Philip Kerr or Alan Furst.  Great atmosphere.

Woman wants to know more about how she could listen to the OverDrive downloadable audio book of Suze Orman's The Money Class.  Could she download it to a floppy disk?  How about a USB drive?

Christy from tax help stops on way back from restroom."Only one more day!"

Her reservation expired while PC was hung rebooting.  Persuade man to let her have his reservation for that PC, get him another, thank him, get her logged in & happy.

2:22  We got off easy today.  A lot going on, Art In The Park, the Garnet & Gold game over at the stadium.  Tomorrow's Palm Sunday.

Phone:  She wants Atlas Shrugged.  Can't find our copy.  Checked in from "Discard" on 1/3, which is odd. Is copy at branch.  she asks me to reserve it, she'll pick it up there.  Call branch, they trap it.

Ruby walks up.  Called yesterday with unemployment questions.  I had printed out eligibility requirements for her.  Says they told her she couldn't draw unemployment and go to school, but wouldn't give her chapter and verse to support it.  Get her to WorkForce Innovation and Florida Statues sites on PC.  Ruby can be demanding.  I always feel a shiver of dread when I see her coming.

Do three more things for Ruby, who wants to get her nephew a Bright Futures scholarship.

Woman complains about guy next to her watching music videos.  She's trying to work.  Give her another.

Couple of young black men wearing rosaries around their necks ask for PC's.  I've been wondering what that's all about.  Found a number of forum discussions, often heated.  Catholics don't wear rosaries as necklaces.  Found a story about it from 2008.  Apparently they are worn for protection.  But police have been finding gang-related signals in them as well.  The first story is three years old, but I didn't start seeing them here until last year.  Possibly adopted from use by Hispanic youth.

4:05  GRE test prep book.  When she tries to use the self-check machine, her card is blocked.  She must go to circulation.

Books about Stonewall Jackson.  He hasn't been to the library since he was in middle school.  I say, "Welcome back!"  He's been watching the PBS series on the Civil War by Ken Burns.  He takes Stonewall Jackson:  the man, the soldier, the legend by James I. Robertson, and Henderson's Stonewall Jackson and the American Civil War.

On Quitting Smoking, and on Too Much News

I was sorry to say goodbye to my Camel Lights.  It came to me in prayer during Advent that I needed to quit, and I thought I had better listen and obey, for my own good.

The hard parts were letting myself actually run out of cigarettes, and then a week later on my Saturday off at home.  That night and Sunday morning the craving was intense.  In church I was afraid I might faint.  And then after Mass the craving eased.

There is so much to keep you busy when you smoke:  all the "moments" when it is time to have a cigarette.  Quitting was like being out of a job, with so much time on my hands.

So Jules agrees, there is too much news!  I just do not want to hear about every disaster on the planet 24 hours a day.  And I do not feel obliged to care about all wars and disasters on the planet.  I say to myself, "No one is forcing you to read the news every day."  I guess that's true, though I have to handle several daily newspapers at work every morning.

I guess I could just tune out more than I do.  When you use newspaper archives as I do, you realize that the news doesn't change very much over the years.  Look at the microfilm from the 1970's and you will see that.
Posted by Brett at 1:00 AM No comments:

Sorry, I haven't posted anything substantial this month.  I've been absorbed with personal and uninteresting stuff:  being a "legislative spouse" for my wife, who has been chained to her desk at the state capitol during the two-month legislative session, and Lent, quitting smoking at 57, (10 days smoke-free  so far).  I've also grown weary of the recent news topics.  I wish I lived in the days when it took weeks to hear news from distant places.

My turn for a book display last week.  April is National Humor Month, says Chase's Calendar of Events.  Dave Barry, Kevin Nealon, Roy Blount, Paula Poundstone, other recent stuff from Dewey 814 to 818.  When I came in today after the weekend, everything I'd pulled was gone.  Work the comic novel angle, pull Jonathan Coe, James Wilcox, Stephen Fry, and others.

Public Access Internet:  it feels like we've pretty much caved to the amazing resistance to or inability to apply for a library card.  If they don't have a card, we ask their name and issue a guest pass.  It is not worth making a fuss about whether they've already had a session, when they can go back and forth between Media on the first floor and us in Adult Services.
Posted by Brett at 12:21 AM 3 comments: 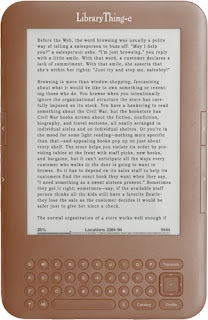