I processed a request for a new book, The Yarn Whisperer: My Unexpected Life in Knitting by Clara Parkes.  I knew, of course, about the 1995 book that started it all, The Horse Whisperer, Nicholas Evans's first, hugely successful novel, which became a motion picture starring Robert Redford.


"He is the stuff of legend.  His voice can calm wild horses and his touch heal broken spirits.  For secrets uttered softly into pricked and troubled ears, such men were once called Whisperers.  Now Tom Booker, the inheritor of this ancient gift, is to meet his greatest challenge." - publisher's description

The Horse Whisperer sounds like a shaman or a wizard.  Some reviewers characterized Evans's novel as "new age".  He talks to the animals, like Doctor Doolittle or Saint Francis.  He has a higher awareness and sensitivity, a capacity for deep intimacy and understanding.

I was vaguely aware that other books had followed with "whisperer" in their titles.  As with the "French lifestyle" books a few months ago, I thought it would be fun to see what the body of "whisperer" books looked like.  There proved to be so many that I was almost sorry I looked!


The Man Who Listens To Horses by Monty Roberts, biography, (1997).


The Dog Whisperer: A Compassionate, Nonviolent Approach to Dog Training by Paul Owens and Norma Eckroate, (1999).

The Tarantula Whisperer:  a celebrity vet shares her secrets to communicating with animals by Laura Pasten, (1999).


The Cow Whisperer:  Stories from the Big Sky Country of Ranchin', Romance, and Rugrats Paperback by Skip Halmes, (2001).

Secrets of the Baby Whisperer: How to Calm, Connect, and Communicate with Your Baby by Tracy Hogg and Melinda Blau, (2001).

Spirit Whisperers : Teachers Who Nourish a Child's Spirit by Chick Moorman, (May 1, 2001).


Secrets of the Baby Whisperer for Toddlers by Tracy Hogg, (2002).


The Baby Whisperer Solves All Your Problems: Sleeping, Feeding, and Behavior--Beyond the Basics from Infancy Through... by Tracy Hogg and Melinda Blau (2004).


Secrets of the People Whisperer: A Horse Whisperer's Techniques for Enhancing Communication and Building Relationships... by Perry Wood, (2005)

The Whisperers: Private Life in Stalin's Russia by Orlando Figes, (2007).


The Man Whisperer: Speaking Your Man's Language to Bring Out His Best by Rick Johnson, (2008).

The Teen Whisperer: How to Break through the Silence and Secrecy of Teenage Life by Mike Linderman and Gary Brozek, (2008).


The Book Whisperer: Awakening the Inner Reader in Every Child by Donalyn Miller and Jeff Anderson, (2009).

The Dog Whisperer Presents - Good Habits for Great Dogs: A Positive Approach to Solving Problems for Puppies and Dogs by Paul Owens and Norma Eckroate, (2009).

The Elephant Whisperer:  My Life with the Herd in the African Wild by Lawrence Anthony, (2009).

The Man Whisperer: A Gentle, Results-Oriented Approach to Communication by Donna Sozio and Samantha Brett, (2010).

The Spirit Whisperer: Chronicles of a Medium by John Holland, (2010).

The King Whisperers: Power Behind the Throne, from Rasputin to Rove by Kerwin Swint PhD, (2011).

The Medium Next Door: Adventures of a Real-Life Ghost Whisperer by Maureen Hancock, (2011).

The Plot Whisperer: Secrets of Story Structure Any Writer Can Master by Martha Alderson (2011).

The Project Whisperer: Understanding The Human Part of The Gantt Chart by Pam Stanton, (2011).

Sleep: Top Tips from the Baby Whisperer: Secrets to Getting Your Baby to Sleep Through the Night by Tracy Hogg and Melinda Blau, (2011).

The Whale Whisperer: Healing Messages from the Animal Kingdom to Help Mankind and the Planet by Madeleine Walker, (2011).


The Child Whisperer, The Ultimate Handbook for Raising Happy, Successful, and Cooperative Children by Carol Tuttle (2012).

The Dude Whisperer: Dating tips for the modern girl: how to stay cool, be funny, and flirt with the right guy... by Rebecca Jean Tingley, (2012).

The Jerk Whisperer: How to Deal with Tyrants, Tormentors, and Bullies... and Still Keep Your Sanity! by Stephen Birchak, (2012).

The Serial Killer Whisperer : how one man's tragedy helped unlock the deadliest secrets of the world's most terrifying killer by Pete Earley, (2012).


The Body Whisperer: Your Symptoms Tell Me Your Truth by Christine Denise Lang, (2013).

The Cat Whisperer: Why Cats Do What They Do--and How to Get Them to Do What You Want by Mieshelle Nagelschneider (2013).

Flowerspeak: The Flower Whisperer's Guide to Health, Happiness, and Awakening: How the Flowers Assist in the Expansion... by Elizabeth M. Patric, (2013).

The Marriage Whisperer:  Tips to Improve Your Relationship Overnight by Patt Hollinger Pickett, (2013).

The Plot Whisperer Book of Writing Prompts: Easy Exercises to Get You Writing by Martha Alderson, (2013).

Reading in the Wild: The Book Whisperer's Keys to Cultivating Lifelong Reading Habits by Donalyn Miller and Susan Kelley, (2013).

Soul Whisperer: Why the Church Must Change the Way It Views Evangelism by Gary Comer, (2013).

Walkin' with the Ghost Whisperers: Lore and Legends of the Appalachian Trail by J. R. Tate, (2013).

Whisperers: The Secret History of the Spirit World by J.H. Brennan, (2013).

The Yarn Whisperer: My Unexpected Life in Knitting by Clara Parkes, (2013).

Death of a Dog Whisperer (A Melanie Travis Mystery) by Laurien Berenson, (2014).

Family Whispering: The Baby Whisperer's Commonsense Strategies for Communicating and Connecting with the People... by Melinda Blau and Tracy Hogg, (2014).

The Hoops Whisperer: On the Court and Inside the Heads of Basketball's Best Players by Idan Ravin, (2014).

The Husband Whisperer: The Gentle Approach to Communication in Marriage by Kevin Hinckley and MED LPC, (2014).

The Psychopath Whisperer: The Science of Those Without Conscience by Kent A. Kiehl PhD, (2014).

Secrets of the Wine Whisperer:  or How I Learned to Drink Wine and Found Ecstasy, Joy, Peace, Happiness, Life, and Salvation by Jerry Greenfield, (2014).

The Shark Whisperer (Tristan Hunt and the Sea Guardians) by Ellen Prager and Antonio Javier Caparo, (2014).
Posted by Brett at 12:24 AM No comments:

Around 2003-4 our library systems guy built a tool which, among other things, let us automate request processing for new materials and materials not owned,  Before the "Materials Request Database", (MRD), requests for new materials were handled by moving paper cards around in file drawers.  The MRD could also flag requests if the patrons had expired or delinquent accounts.  It could generate e-mail notices to patrons.  It could place holds for patrons as new materials were cataloged.  It was also linked to OCLC, letting us send interlibrary loan renewal requests without having to log in to OCLC. 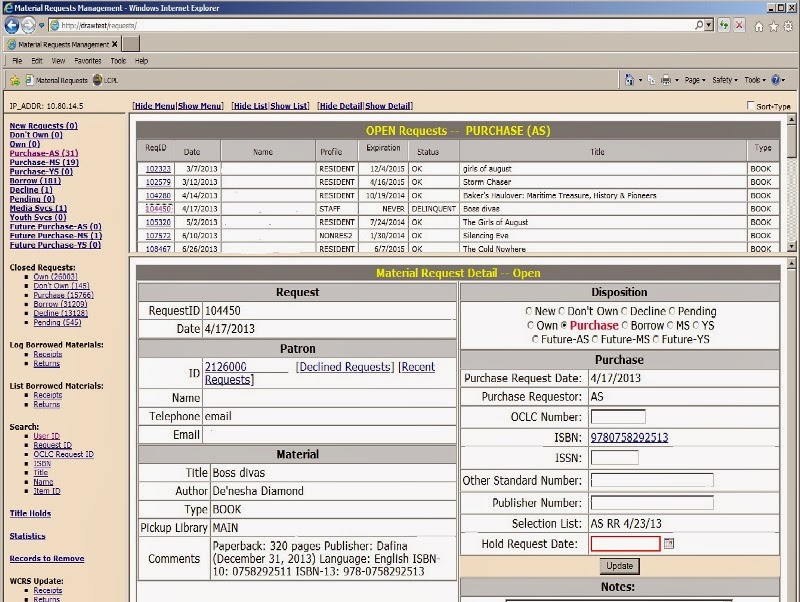 But over time, upgrades to our SIRSI library system and to OCLC have broken things in the MRD.  The man who built it retired long ago.

In December 2013 we migrated to ILLiad, an OCLC product for interlibrary loan and document delivery.  We have adapted it to handle new materials requests as well. 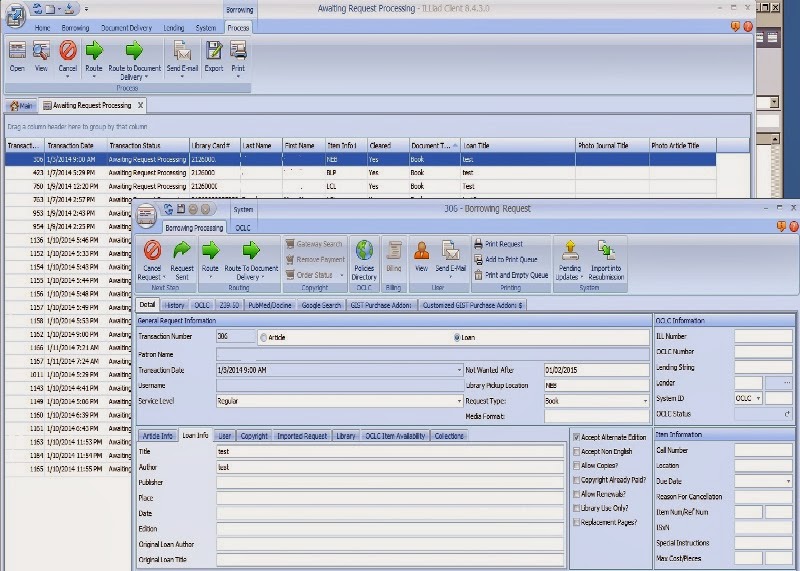 Patrons now must create an ILLiad account to make new or ILL requests, but they can track their requests, which they have not been able to do for some time.  Staff can search OCLC, Ingram, Amazon and Google all in the client's request window.  Patrons are now limited to five active requests, which ought to ease the load on our overburdened book selection and ILL staff.

We are still working the bugs out, but it is surprising how quickly our patrons have adapted.  Very quickly after we made ILLiad available at the beginning of January, they began to sign up and submit requests.  We are also creating accounts for patrons who cannot do it themselves.


We are unveiling a new library web site very soon, with a cleaner look, integrated into the main Leon County site. 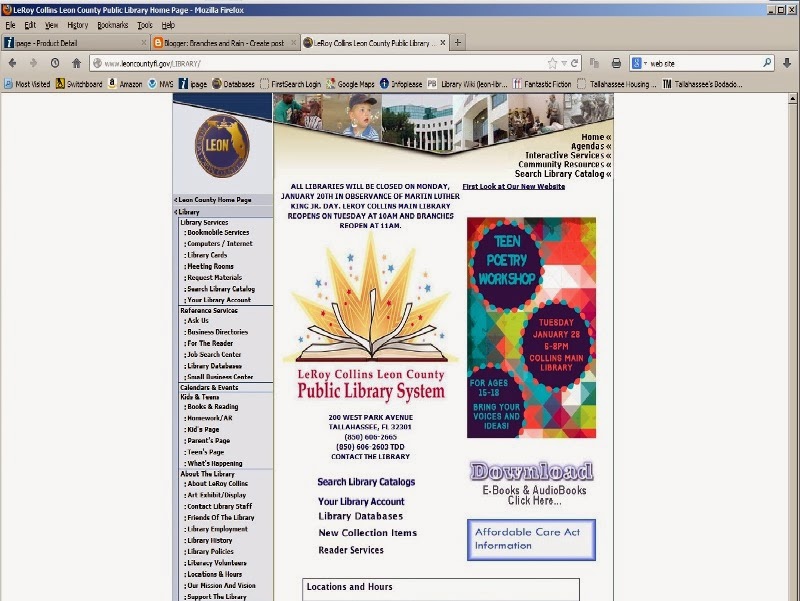