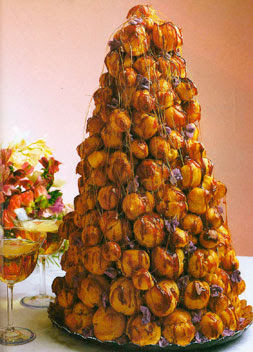 It was the worst time to take a serious reference question.  Right after opening, this Monday morning, a young man asked for help finding information on the "French Wedding Cake".

Monday mornings at the main library begin with a rush of people wanting Internet sessions and the daily papers, and with a flurry of phone calls.

But you take it as it comes, and at least we had three librarians on the floor.  He and I looked in the cake books in the Cookbook section.  Nothing on French wedding cakes.  We looked at the books on weddings, some of which had good chapters on choosing a cake.  None mentioned a French cake.  Had he looked online?  Yes, but he wanted more.  He was enrolled in a culinary course at Keiser College, and had to research the topic for class.

We had spent ten minutes looking, and already I felt the need to get back to the desk.  We checked the reference collection, looking in Larousse Gastronomique without result, though it referred to the wedding cake, as such, as an English creation.  He showed me the printout from his online search.  Aha!  His cake was a croquembouche, and for that we found an entry in Larousse.  It was not a cake for weddings only, but it might be served at one, and at other special occasions as well, such as baptisms and first communions.

By now I really had to cut him loose and go help at the desk.  Could he check the cake books for croquembouche on his own?  He thought he could.  Poor MF seemed a bit mauled when I got back.  I apologized for being away so long, but I also felt bad about having abandoned my patron to his own efforts.  Triage, I guess.

It shows how misleading a reference question can be.  Neither he nor I knew how ethnically English the idea of a "wedding cake" was.  Looking at home, I find in Google Books that Wedding Cakes and Cultural History, by Simon Charsley, (1992), expands on this:

Viewed from the European mainland this wedding cake has always seemed a peculiarly English development. In periods of Anglomania such as the 1890s in France, it might be viewed with friendly amazement. Montagné in his great Larousse Gastronomique, originally published just before the Second World War, is more guarded. He identifies it as based on the distinctively English plum cake, by then marginally incorporated into the French and Belgian confectionery range. The wedding cake itself is 'a monumental cake', 'a symbol rather than a delicacy, a tradition handed down from one century to the next, whose origins are lost in the mists of antiquity.

If the French, Dutch, Germans, Italians, or other continental Europeans were to celebrate marriage with a cake of some kind it would be altogether lighter. It might share in the tendency to rise high and to be relatively large, but the standardisation and specialisation which are such marked features of the British cake developed much more hesitantly.

In France and Belgium there were two main styles. Regarded as the more traditional was a giant croquembouche.  This is a cone, wide at the base, built up of small round choux pastries which are filled with confectioner's cream and dipped in hot toffee. As the toffee cools it solidifies, making a light brown glossy construction. This can then be decorated with ribbons and sugared almonds, birds and flowers, and often, for weddings, a small bride-and-groom mode on the top. For baptisms, first communions and other events, a similar though probably smaller cake may also be prepared with slightly different decorative motifs. Each guest will be served a number of choux broken out from the whole as a sweet course in the wedding meal.

At home tonight, over supper, I told R. of my search for the French wedding cake.  "Oh, a croquembouche!", she exclaimed, "You should have called me."  We had watched a program, years ago, in which Martha Stewart and a quite elderly Julia Child each made one.  Martha's was, of course, perfect, while Julia's was more, well, rustic.
Posted by Brett at 11:59 PM